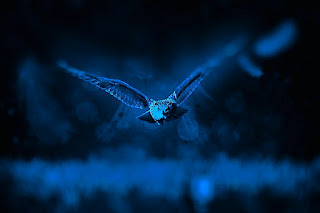 A new allergy over the counter medication -- Xyzal -- is using an owl, in a cartoony puppet type way, as its mascot. Complete with a British accent.

Sanofi explained the owl in a email to FiercePharma: "Owls are nocturnal animals that are known for being wise, so ‘Nigel the Xyzal Wise Owl’ seemed like a perfect character to educate allergy sufferers about this brand," (Fierce Pharma)

The Xyzal owl is shown in a library, wearing a monocle, sometimes wearing a lab coat. Assuring us there is knowledge, wisdom, and scientific history within this new allergy stuff. There's something comforting in the old fashioned, white coated and bookish owl. 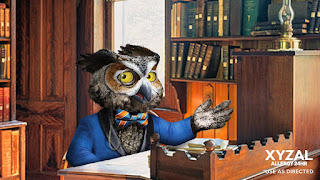 I'm struck by the imagery: wise owl (owls long considered wise in popular culture and used to promote wise behaviors), its use of a Brittish accent, which seems to always impress us Americans, and the name itself. A series of X-Files like letters -- Xyzal -- invoking titles for top secret files and scientific gene things. (I know, I need a more wholesome hobby, one that gets me out more.) And of course, we have the Owlman mystery, also British, still unsolved. You can Google the Owlman legend and get lost researching the topic, but here's one link to a 2015 piece by Nick Redfern on the topic: The Owl-UFO-Connection Continues.


Owls are a Fortean staple in UFO narratives. "The Owls are not what they seem" is a pop culture classic line from the T.V. series  Twin Peaks. Giant owls appearing during UFO experiences are common. For a great read, see Mike Clleland's The Messengers: Owls, Synchronicity, and UFO Abductee.

No idea how this allergy med works. As someone who does, indeed, suffer greatly from allergies, I might give it a try.