Lots of links to  Mothy news, thanks to The Anomalist.

We have Nick Redfern on the "parachute" explanation:

Scroll down in same section at The Anomalist for more links related to Mothman.

Related to Redfern's parachute article, in 2014 I commented on Soldier of Fortune's article on parachutes mistaken for Mothman. As I wrote back then, "yeah, right."
Posted by Regan Lee at 12:24 PM No comments:

Still reading Lon Strickler's Mothman Dynasty. I had put it aside for awhile  --- not because it wasn't good, but just very busy -- and picked it up again two nights ago.

Last night, after having spent a couple of hours reading, I had a horrible, creepy dream. Warning: graphic and violent.

The dream had nothing at all to do with Bat-Man, Winged Humanoids, or Mothman. But the reason I find the dream interesting (if not disturbing) is because, in many witness accounts of encountering this winged humanoid/Mothman, they report having violent, disturbing dreams after seeing the creature. 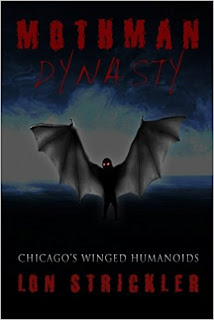 I also find it interesting that this dream had nothing to do with me. It was one of those dreams that have you go "Where did that come from?!" It didn't make sense; I wasn't upset about anything or feeling ill. In fact, I was having a lovely time on the Oregon coast; a few days of relaxation.


I'm in a movie theater, watching a Hitchcock film. (The movie isn't any actual Hitchcock film; but in the dream, it was, and in black and white.) It's the ending of the film; a mother and daughter coming down stairs, with a man behind them. (A sort of Glenn Ford type.) The mother and daughter are both young; the daughter, in her twenties, and the mother could pass for her sister. The movie is sort of a comedy, but also a mystery. Some kind of twist at the end.

Now I'm watching the remake, made in color.  I end up at the set, but it turns out to be reality. I follow the young woman into the set, which is a large warehouse. The 'director' is there. Naked women are stretched out on huge wooden wheels. Of course, the 'set' turns out to be this psycho's domain.

The women are all young, and silent. Tied to the wheels with ropes. The director tells them he is going to torture them, but of course, he goes on, it's not real. But it is real!

I am terrified. I don't know what to do. The man cranks the wheel, lowering it into a meat grinder, where the woman's leg is ground, then he brings the wheel back up.  He inserts a large nail into the side of the woman's head.

His plan is to do this to all the women, slowly torturing them, before the big ending. Which is to place the women on huge crucifixes, with ropes, then nail their hands and feet into the wood.  I am horrified but don't know what to do. How do I save the women? How do I remain safe?

Again, this obviously doesn't have anything to do with winged humanoids. But I do find it strange I had this nightmare after reading Strickler's book.

St. Vincent de Paul's had a 50% off book sale today. I found this, and other UFO and cryptid books, score!

This edition is selling around $160.00 on ebay. I think I'll hang onto this for awhile -- I do have a paperback edition of course. But this vintage edition is too nice to sell right now. I like having it around.

It's in very nice condition. 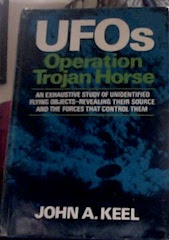