I've been playing around with collage. Namely mixed media on index cards. Really fun and am pleased with what I've come up with. Some collages are random, some I go in with having a specific theme or idea in mind.

I wanted to do something related to Mothman. I used my sketch of Mothman in this collage. 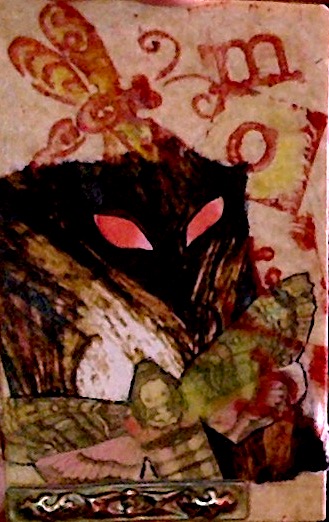 This is the second paranormal themed card I've done. I did one of a praying mantis  - it's posted at my Orange Orb blog.

This has inspired me to do a series of cards based on UFOs, cryptids and otherwise mysterious things.

Not Mothman exactly. But a memory of something that happened when I was very young involving a giant bird that covered the opening in the roof. A winged, bird like creature. A Garuda? Mothman researcher and writer Andy Colvin has mentioned the Garuda figure (a mythological bird creature, eagle like, in Buddhism) in the context of Mothman. 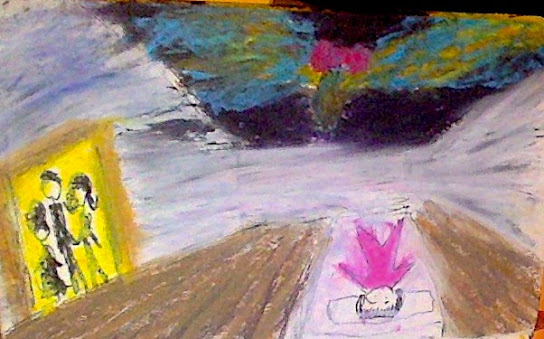 Memory. Logic tells us, me, it was "just a dream" of course. But I remember this as real. It really happened.
I was four? In my bed, no covers. Right in the middle of the bed, spread eagled. (no pun intended.) I was, as usual, waiting for "them." I knew when they would come -- whoever they were. Or, whatever they were.
The only thing I remember in the bedroom was the bed -- no covers -- with me on it, right in the middle of the bed, no covers, and waiting. The ceiling opened up. Slid open, like the panels in the roof of an observatory.
I wasn't scared, but, I was in awe. I knew I was safe, but also, that this was important.  Meanwhile, my father and mother and grandmother were standing in the bedroom doorway (no door) surrounded by yellow light. They could not come in. Not because they didn't want to, but because they couldn't. They are being held back by some kind of force. Something was keeping them from entering.
Meanwhile, the ceiling. Open. Only sky. Night time sky, beautiful brilliant stars. And a huge bird, with a wingspan to immense it almost covered the entire sky. Wing tip to wing tip across the bedroom roof.
And I was waiting for it. Him, her, I don't know. I don't think it was either. Or, it was both. But I knew "it' would come, and take me.
And I was not afraid. I was in awe. I was amazed. I was happy "they" were back. But, not scared.
I never had a bedroom that was stark -- meaning, just the bed in the middle of the room. And I don't remember having siblings at the time. I am the oldest, so I was at most, six. But I know I was younger. I remember it being the Corning Street house (in L.A.) so, no siblings yet.
Also, strange my father would be there. My parents were divorced at that time and I don't remember him being around that much then. My grandmother however, did stay with us.
Posted by Regan Lee at 2:16 PM No comments:

On 6 Degrees of John Keel, Kendra Maurer writes about an experience she had as a teenager while on a school camping trip in The Wandering Canoe.  She references Mothman, though the post isn't about Mothman, and the excellent Where the Footprints End.

With all our hopeful energy assuming 2021 has to be better, maybe it will be. 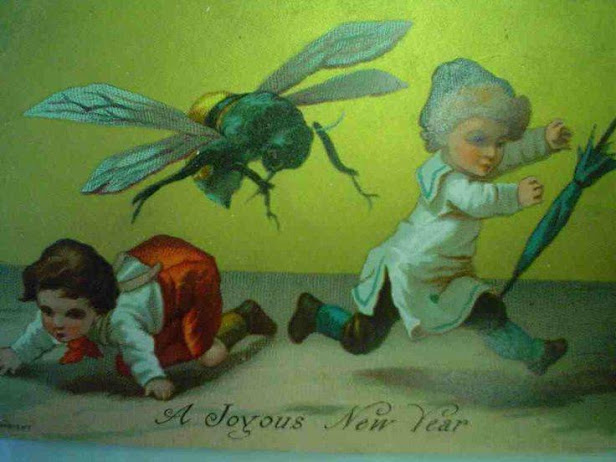 On my blog The Orange Orb you can see some of art work, also on Facebook. I bought myself a set of Neocolor crayons -- they are great to play with! Experimenting with abstract creations, and wanting to do a Mothman piece, I came up with this. Just a sketch, ideas, and getting used to the materials. Hopefully I will create a Mothman inspired piece soon. 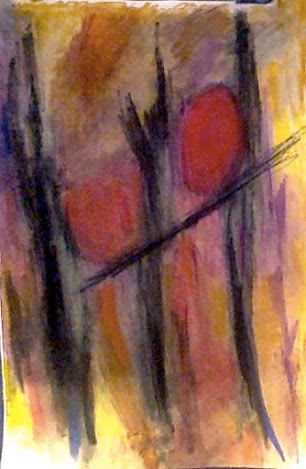 Colvin: Flying Saucer to the Center of Your Mind 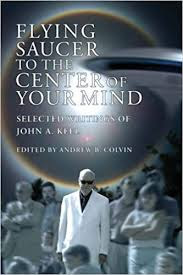 My copy of Andrew Colvin's book arrived today. Excited to start reading it. And, I admit I am not being humble, surprised and pleased to read that my name was included in his acknowledgements.

I have my pens, highlighters and sticky notes at the ready! (I am a nerd.).
Posted by Regan Lee at 5:20 PM No comments:

Haven't been blogging much lately -- down with pneumonia these past weeks. Mostly on my Orange Orb blog on Wordpress. Other than that, not much.

Seems Mothman is seemingly appearing elsewhere. Chicago, for one. 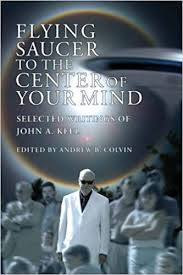 And the excellent series Hellier series (Greg and Dana Newkirk) finds connections to Mothman, even though they were investigating strange goblin like happenings in Kentucky.

As mentioned in Hellier, I just ordered Andrew Colvin's book about John Keel: Flying Saucer to the Center of Your Mind. Should arrive tomorrow!