I was the guest on Sunday's Strange Frequencies program. Which is a fairly skeptical show; the hosts, Jason Korbus and Bobby Nelson are fair minded skeptics. But it went well and I had a good time. Doing interviews is weird; you don't say what you think or assume you were going to say, you don't have time to get to what you want to address, questions are asked by the hosts that lead you off into a direction you hadn't intended to dwell on, and at the end, you realize you didn't make your point, or could have said a lot more about this or that. Of course, I haven't had "media training" some buzz word I've heard others refer to, so what do I know. All this rambling leads to the Mothman Owl Theory. On the program, the hosts talked about Mothman and skeptic/debunker Joe Nickell, and Nickell's  "owl theory." The idea, as many skeptics believe, that Mothman was just a big owl. (Joe Nickell, always disingenuously promoting himself as a "paranormal investigator," has offered owls as the answer to not only the Mothman phenomena, but the Braxton "monster," and the Kentucky entities.)

The discussion centered on elusive memory and tricks our minds play, Linda Scarberry, and owls. What I wanted to get at was a broader context.

Mothman didn't happen to just one person. Dozens of witnesses have seen Mothman. Mothman sightings continue. During the "Mothman flap" several anomalous events occurred: UFO sightings included, strange electrical phenomena, telepathic communications among them. The whole area seems to be haunted and a focal point for weird events. The military has had a presence in that area. Researchers, like Andy Colvin (himself a witness) have delved deeply into these connections. So we have a context of much more than one person seeing an owl late at night. 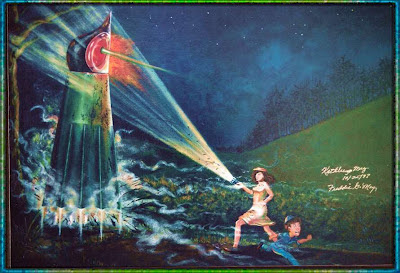 Stanton Friedman had this to say about the Braxton County Monster and the owl theory:

A six-foot owl that puts out a noxious vapor, has never been reported before or since, and certainly sounds like trying to fit a square peg in a round hole...especially when here was no report of moving wings. ~ Stanton Friedman, on Braxton County Monster-REVISED EDITION" 2012. (See also Super Soylent... But Not Very Salient! by Alfred Lehmberg.)

While both cases (Mothman and Braxton) are obviously very different, the same theory is applied to both. Both do contain a covert human element, namely, the military.

My personal theory is that, in the case of Mothman, manipulations of non-human energies by humans (military, shadow groups, etc.) account for some of the Mothman phenomena. I think it goes far beyond that however; Mothman being an actual non-human and unknown (not known animal)entity of some type.

The Braxton "monster" too, seems to be of possible military or para-military origin, and I'll entertain the ET theory as well. Both are more logical than the "owl theory."